Morning all.
It's time for the last challenge of the year over at Uniko.
Here is my inspiration for you. 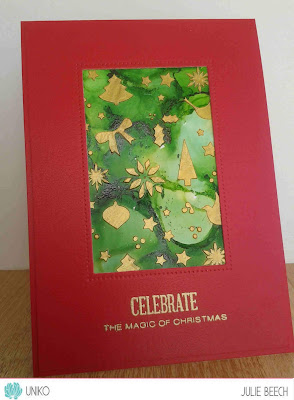 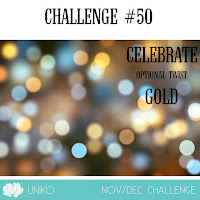 I decided to play with my Copic Various Inks and Embossing Paste on Yupo paper, to create this panel.
Just a few drops of the Various Inks, blow down a straw to allow some mixing, then when dry add gold embossing paste using the Scandinavian Christmas Stencil.
My frame was cut from a panel of red textured coated card that's been in the stash for years, using an Avery Elle die. The sentiment from Pure Florals Poinsettia was stamped and embossed in gold.
My completed panel was then trimmed to allow a small border and glued to a matching base card.

While I was playing with my inks I created a blue panel and turned it into this. 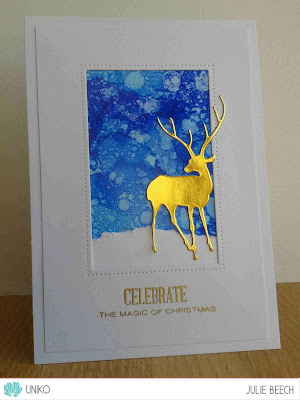 For my background panel I used some Copic markers as well as my Various Inks. The main reason being I don't have any dark blue Various Inks!
On a piece of Yupo, I scribbled some B29 and B39, then added some Various ink in B12 and B00, as well as a little colourless blender to make the ink move around. This produced a more even colour on the panel just what I wanted.
I placed the scattered Polka Dots stencil over the panel and spritzed with some isopropyl alcohol.

I quickly moved in with a piece of kitchen roll and mopped up the excess ink before removing the stencil and washing it quickly. When I came back I decided that there wasn't quite enough texture so gave it another light spritz with the alcohol without the stencil, mopping again. This gave a much better result and softened the edges of the previously stenciled area. The alcohol reacts with the ink but because some was removed with the stencil you get a different effect in those areas.
I repeated the layout and sentiment but on white this time and added a torn card snowdrift and a gold stag cut from mirror card with an IO die

OK, that's all from me but don't forget to check out the rest of the girls' inspiration here. 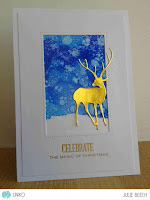