Have you come across Brusho ink powders and their ilk? I love them, the end results are usually spectacular so when I saw that you could stamp with them I just had to try for myself. This is the result of my experiments. 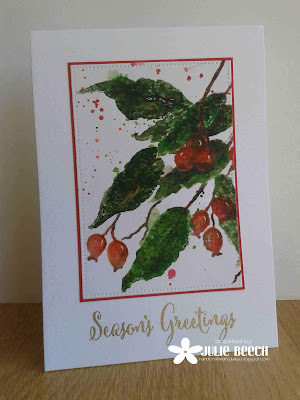 The idea is that you ink the stamp with Versamark then sprinkle Brusho or other ink crystals over, spritz with water then stamp. I chose a PB stamp as it had large leaves but then realised that the berries were also on the leaves so I had to rethink the technique to get a good image.
Using my MISTI, I inked the berries and stems with a Versamark pen before adding my powders and spritzing and stamping on watercolour paper. I repeated the process, but this time over the leaves. Think I went a bit mad with the water and put too much Brusho on the leaves as well but the end result wasn't too bad, especially when I added some splatters! To crisp up the berries, I added some white hi lights with a gel pen.
The panel was originally bigger but I decided to cut it down a little, eliminating most of the branches from the design, mounted it on a panel of red and then an off white base card. Sentiment is from Uniko.

CAS Christmas
Posted by Julie B