Good afternoon.
Over at Color Hues we have a new colour combination for you but we are also playing along with the wonderful Michele Ferguson - I card everyone, as part of her Playing Cards With ...  series of posts. So without further ado here is my take on the colours and Michele's theme of Stars and or Stripes. 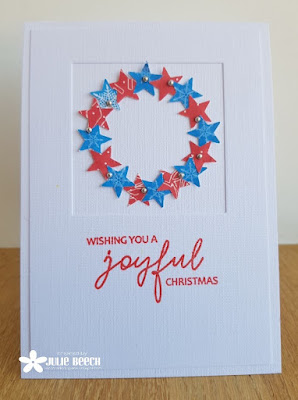 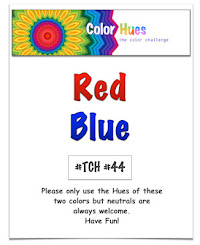 I need to get a wriggle on with my Christmas card stash, so as someone reminded me recently, blue and red make a good Scandinavian Christmas combo. I rooted in my stash of DP and found some red from a Marianne Designs Scandinavian Christmas set and although the blue had been used previously, I found some other suitable in the Christmas DP box!
The stars were punched from the DP and then arranged onto a thin frame of white card, cut from a scrap of card with 2 circle stacked dies. A few small silver gems were added to complete.
The frame for the wreath was cut from some white linen effect card trimmed to leave a border on my A6 base card with a square die and the sentiment from Uniko stamped in red below.
Now it's over to you. You don't need to follow Michele's theme of stars and or stripes just keep it to the Color Hues colours of red and blue. Of course if you want to use Michele's theme then that's perfectly fine too!
There's more red and blue inspiration from the rest of the team here and why not pop over to Michele's blog and say hello too.
Joining in over at:- 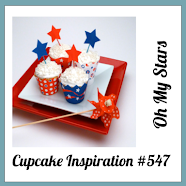