Hi, just popping by to share a card made for a few challenges out there. 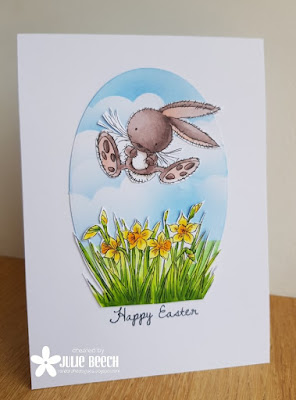 I needed another Easter card to go with the one I made a couple of weeks ago but this time I was influenced by a couple of challenges so went with this LOTV image Spring Bunny with Daffodils. In the original image he isn't jumping quite so high but to make a better arrangement on my background I decided to cut him from the flowers and added him separately.
On an oval white die cut, I inked the background using the MFT cloud stencil, added some green at the bottom, then added the Copic coloured fussy cut daffs.
After colouring with Copics and fussy cutting the rabbit, I added him to the top half of the oval.
The finished panel was then added to a plain white A6 base card on which I'd stamped the sentiment in black.
That's about it, thanks for stopping by.
Joining in over at:-

Hoppy Easter/ Animals
Posted by Julie B
Email ThisBlogThis!Share to TwitterShare to FacebookShare to Pinterest