Chicks to Penguins and a Robin

Good morning peeps.
Over at Twofer, Darnell and the team are in avian mode, two cards, two different layouts and occasions using the same image. Well my first thought was my Stampingbella chick stamps that I've used in the past to create Christmas cards by turning them into robins and penguins so here is this years take!
My first card was influenced by the challenges at LIM and AAA and a card featuring cats and baubles I found on the Stampingbella site. I know cats and birds don't usually mix but just give it a chance!
AAA want cards to feature twinchies, mine is slightly smaller but I think it fits the bill. I took one of the Stampingbella Bubble Chick images and added a bauble fixing freehand and turned the chick into a festive robin. I think his photo was captured after those cheeky robins from a couple of years ago found the Christmas tree and broke the string on one bauble and ended up on the floor! 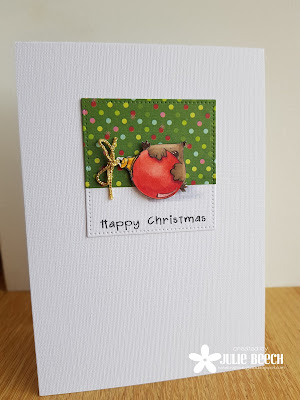 I used a scrap of DP for wallpaper adding the sentiment from Woodware at the bottom of the die cut square. A small piece of gold twine was added to the bauble and then added to my twinchie on pads, a little Copic shading completes.
My second card is a birthday card using a few odds and ends from my scrap box and a couple of penguins that were left over from this project. I have been trying hard to use up all those leftovers this year, recycle and reuse, however my box doesn't look to be getting any emptier! 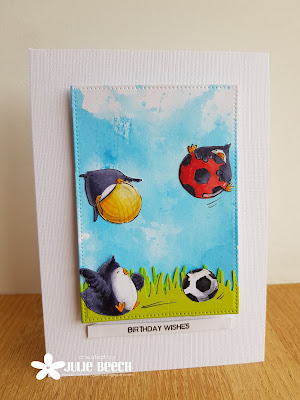 The background panel is a leftover from a smooshed one from whenever and the grass strip was also languishing in the bottom of the leftovers box, awaiting re use. The two penguins on balls were the ones from the stash, so I only had to stamp the large one and a spare ball, which started life as a bubble, on some scrap bits. Once the grass was added to my blue panel, I used a die to neaten it all up and added the footy, soccer for my US friends, playing penguins. I think they need a little more ball control, don't you? The sentiment strip and panel was then added to a white linen effect A6 base card.
Here are both of the cards featuring the same Bubble Chick, masquerading as a cheeky robin and as a failing footballing penguin! 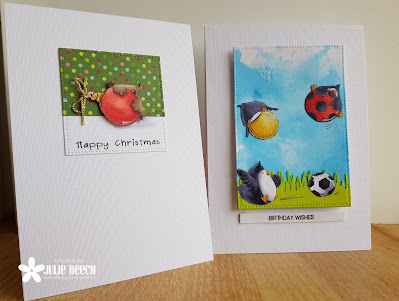