May you never outgrow bubbles

Good morning peeps.
Its Tuesday and I know that because its time for a new challenge at Cardz4Guyz. Must admit that days are blurring and the OH even asked me what day it was on Sunday! If it wasn't for my calendar of DT posts, I would be well and truly lost!
This time our theme is:-

I did struggle at first with ideas for a masculine shaker but eventually I came up with this. 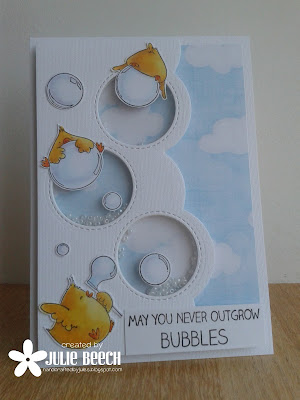 I used a MFT peekaboo die set to cut the apertures and cloud edge before adding the cheeky bubble chicks from Stamping Bella. The pic at Inkspirations also lead me down the yellow chick route!

The shaker elements were made by layering the while cloud panel with an acetate one and two fun foam ones. I did use just one layer of foam at first but it was a little too shallow for the bugle beads to move around. I used these beads as they reminded me of tiny bubbles and they have been in my stash since my daughter started dancing over thirty years ago! They are probably older than that because they were given to me by an aunt who used them for my cousins ballroom dresses! Also, they are a little less feminine than sequins. The background cloud DP is a scrap of NitWits from the bits box.

There are lots more masculine card ideas from the rest of the DT here, so why not join in?

The idea of using these cheeky chaps also came from Darnell's Twofer challenge where bubbles/ circles are the theme. So whilst the chicks were on my desk, I decided to turn them into penguins and make a Christmas card. I've made them into robins on baubles before here and here, but thought footy playing penguins would be fun too, so bubbles became soccer balls this time. 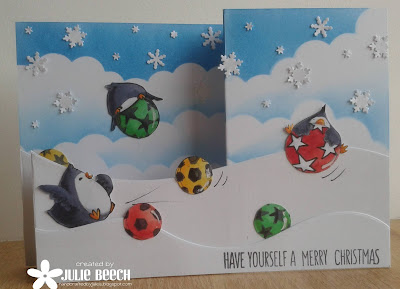 I'm not sure what the style of card is called but it allows the card to stand quite solidly without it being too complicated to construct. The idea of chicks being penguins was introduced by the fab Faye on one of her Copic colouring classes and I've not really explored this avenue before! The background was made by inking the folded base with a cloud stencil and Salty Ocean DI. The snow drifts were cut with a die and then covered with a glaze of clear Wink of Stella and then added. Sadly the shine doesn't show up in the pic!
After colouring with Copics, the penguins and 'bubbles' were fussy cut and added to the card. The background looked a little too un Christmasy, so I added some tiny punched snowflakes and some freehand movement lines below a couple of the balls with a fine liner. The stamped sentiment is from Uniko.

Here are both of the cards together. 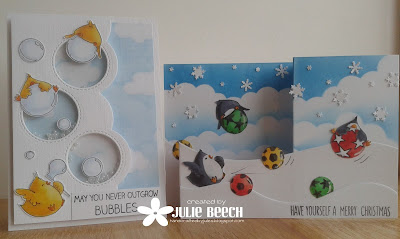 That's all from me for the moment, see you all later! 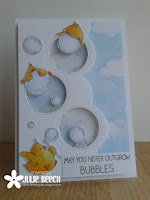 Let's hear it for the boys