Good morning folks.
We have a brand new challenge for you over at Cardz4Galz.
We would like to see your take on the theme -

I haven't really got a favourite movie so it was after trawling though my stash that I came across this LOTV stamp of the little tomboy Annabelle playing with her football that inspired this card. 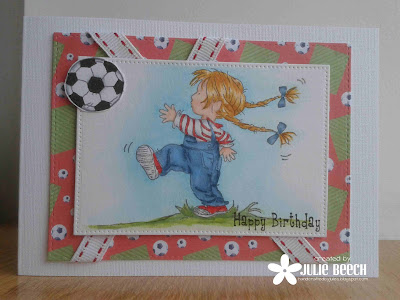 Anyway, the movie that came to mind was
'Bend it like Beckham'

It's the story of an Asian girl who goes against her parents and culture in order to play football.

This LOTV image reminds me of myself when I was a little un! My Dad used to play semi pro soccer in the late 40's and early 50's, even getting a trial for Arsenal after playing for the RAF during his national service. However my arrival put paid to his footballing days but he always had a gang of followers on the beach in the summer! Having no sons, I was the one that got to play with the boys on the beach and loved it. Back in the day girls didn't play football so I had to content myself with hockey.
I often wish that I could have taken soccer further, the nearest was playing in a team made up of friends that took part in a tournament whilst at college, it's so much easier for girls these days.

I used the layout at Sketch Saturday for this card, colouring the image with Copics. For the hair I used blonde colouring (E50, Y21, Y26, YR24 and YR27) as I was a little blondie back in the day, rather than the star of the film. I do find myself using this colour for hair a lot, my grandson also has a lovely head of blond hair!

OK, for more inspiration, check out the rest of the team and why not join us? 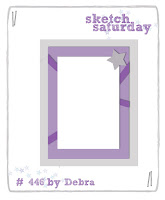 Favourite Hair Colour and Why.
Posted by Julie B
Email ThisBlogThis!Share to TwitterShare to FacebookShare to Pinterest