Evening folks.
I'm back to announce the start of another challenge over at Perfectly CAS.
Here's what I came up with. 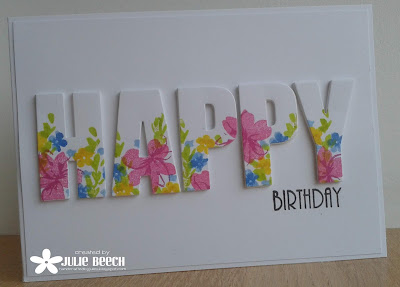 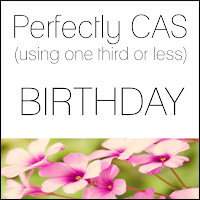 My design did start as something else completely but then I decided it wasn't CAS enough, so had to think again, more of that card at a later date!
This month I've used the middle third for my design, which is loosely based on the current CAS(e) this Sketch layout.
The 5 bars are represented by the letters of happy and the stamping was kept to those as well, the sketch also reminded me of this card from a couple of years ago. My sentiment is incorporated with the stamping.

The original idea was to use the die cut outlines of happy but I used the die cut letters instead, which I stamped with some of my smaller flower images whilst they were temporarily adhered to a strip of Post it tape. I used a couple of Altenew sets containing small flower stamps, Vintage Flowers and Wild Flower Garden and the colours from their latest challenge. The die cut letters are also from their large alphabet die set.
Once I was happy with the stamping, I removed the letters and added a die cut foam letter to each of them so that they would pop up from the background panel. Before gluing down permanently, I stamped the Birthday from STAMPlorations Balloons and Banners in black.

For more CAS birthday inspiration, check out the rest of the team here. 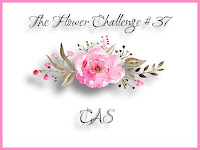