Hi and welcome to a post to announce the start of this week's challenge over at ATSM.
Here is my card, can you work out the theme? 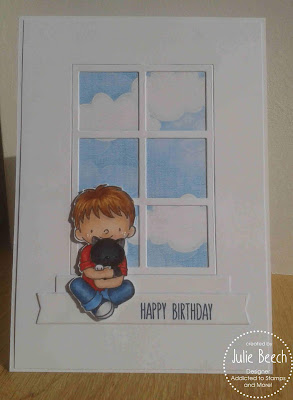 Well this week we are around to our CAS challenge.

I used a few challenges for my inspiration for this design, LIM would like to see pets, ATCAS masculine, AAA friendship and it's the Male room's 5th Birthday.
As a family we've had a few different pets over the years, Max the current house dog, Gilbert the hamster who escaped and piddled in my A. Doris's mohair coat, Joey the budgie, Chico the poodle and when we got our first house Thomas Pusscat. He, I say he but he could just as easily have been a she as the vet couldn't get near 'it' for flying claws to check, was a stray that the local ruffians tried to hang in a tree behind the house, we took in, or rather he allowed us to feed him. As you can expect he was rather reluctant to trust humans but eventually he became part of the family. He was black with a white bib and a couple of white paws.
When I was pregnant with our first child, he would lay across the top of my growing bump and then prowled around the house looking for me when I was admitted to hospital. Taking one look at the returning bundle he sniffed then walked out with tail erect! He was quite an independant cat and hated catteries so he came with us on holiday once and was even walked on a lead! When my second child arrived he was getting on for eight but took to the youngest and would wait for both to arrive back from school, waiting on the wall at the end of the road, you could almost set your clock by him. The kids loved him and were heartbroken when he walked out one day and never returned, despite a thorough search of the neighbourhood, they'd lost a friend and family member.

Anyway down to the card. The window was cut from a panel of white card using a MFT patchwork die minus the patchwork panels and was replaced back into the panel with some NitWits DP behind. The MFT BB Buddies little boy was coloured with Copics and fussy cut and placed in front of the window. I made the window sill by cutting some banner dies and stamped the greeting on one end.

A very quick CAS card really. For more CAS inspiration, check out the rest of the team here, then why not join us. 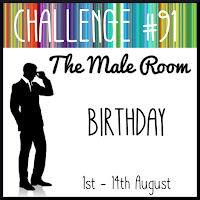 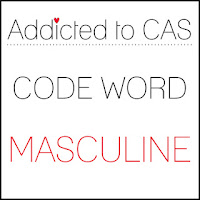 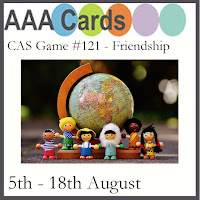