Stamping on Tissue Paper and Brusho

Good morning all.
It may be summer outside in this neck of the woods but over at Cardz4Galz there is a decided chill in the air, metaphorically speaking that is!
Our brand new challenge theme is -

I'd already made a traditional card for the challenge over at Cardz4Guyz so decided to go a little more contempoary with this. 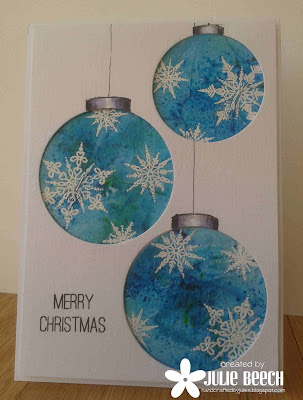 I was determined to join in at CAS Mix up where they are playing with tissue paper, then I saw the latest challenge at Inkspirational and the ideas just came together. It even evolved again as as soon as I cut my top panel with circle dies, I saw baubles! I had originally decided to go with large stamped and embossed snowflakes but after  the idea of baubles took hold, I went with some smaller ones, stamped over panels of Brusho covered tissue mounted on card.
I made the panels by sprinkling Prussian Blue and Turquoise Brusho onto my craft mat then spritzing with water, then laying my tissue paper over the top. Carefully removing the tissue I put it to one side to dry before gluing it onto circles of card slightly larger than the apertures on the top panel with PVA glue. I coated the top with more glue and added some fine Brusho powder to give extra texture. When totally dry, I gave them a good dusting of anti static powder and stamped and embossed the snowflakes in white. The position of the snowflakes towards the edge of each panel gives the idea of a sphere I think.
I sketched the neck of the ornaments with a black fine line marker and added water to pull out the colour and blend, then used the same pen to draw in the hanging threads. A Uniko sentiment completes the top panel which sits on pads over the tissue ones, which are glued to the base card.

For more inspiration please check out the rest of the team here.

Joining in over at - 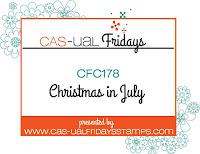 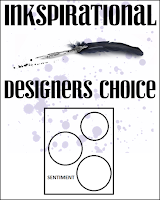