Good afternoon.
Back again to remind you that there is still time to enter the theme/sketch challenge over at STAMPlorations.
Here is my card which uses the sketch as well as the theme. 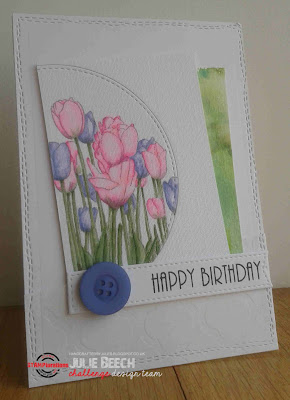 I was a little stumped at first by this month's sketch and stared at it for quite awhile before inspiration struck! 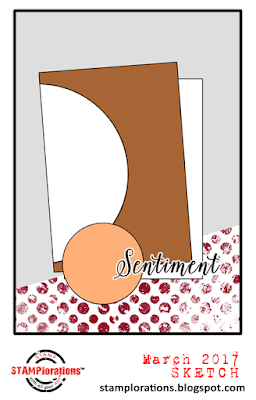 I used a NEBUS stamp called Sketched:Tulips, it's one of Shery early one's but gorgeous none the less!
I used some linen effect card for this, as I was going to keep it very CAS and it gave just the right amount of texture. On a rectangular scrap of the same card, I diecut a half circle and then stamped the image a couple of times in Memento London Fog, replacing the semi circle back into the original panel after colouring with Copics. The colours I used were inspired by the challenge over at Cupcake Inspirations.
I looked through my offcuts for a green that I was happy with for my second panel, but in the end I made my own by smooshing a panel of card in some DI spritzed with water.
The top base panel was cut using a  CUTplorations Crazy Double Running Stitch Nesting Rectangle die and the bottom of the panel was made by embossing another previously cut one with an ARTplorations Foiled Again stencil. They make a good substitute for an EF even if it doesn't quite show up in the photo! A matching button from the stash and a greeting banner using text from Balloons and Banners complete.

Well the hairdressers is calling, so I better get a wriggle on! For more fantastic inspiration check out the rest of the DT and GDs here, where you'll also find all the Ts and Cs.
Don't forget ifyou use my discount code you'll get 20% off when you order from the STAMPlorations shop. 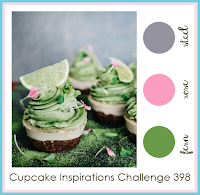 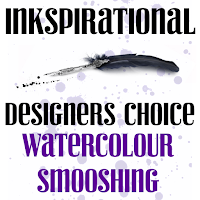 My choice - Die cutting, Alcohol Markers and Embossing
Posted by Julie B