A birthday card for Jenny

Good afternoon.
Felt the need for a bit of crafty time for myself this morning. I'd taken the dog out and sat down with a cuppa and realised that it was coming up to my friend and ex colleague Jenny's birthday. Flicking through my stash I soon decided that I needed to make a card. I think I need to explain at this point. While I had lots of cards in the stash, Jen is a Leeds Rhino's fan, they are a Rugby League team who play in blue and gold. I usually try to make her something along those lines. Last year I actually included a rhino in a team shirt but this year I decided to go more floral! 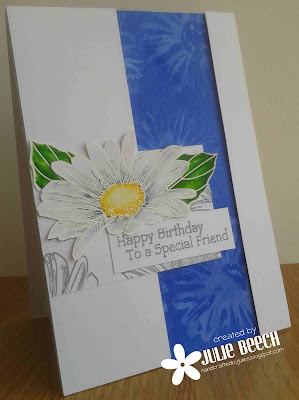 I used the photo (mainly the colour) and sketch at Fusion and the theme at Time Out as a starting point for this card.
I started by inking a panel of card with Blueprint Sketch DI and then gave it some interest by bleaching a pattern with one of the daisy stamps from STAMPlorations Bloom Sketches. The other daisy flower was stamped in Versafine them embossed with white, watercoloured with my Zigs and then fussy cut. On a scrap of white card , I stamped the same daisy in Grey Flannel Memento, then trimmed it down to size. The coloured bloom was placed over the panel and a LOTV sentiment stamped in the same Grey Flannel. The top white panel was then popped up over the base and blue panel with pads. The center of the flower was the gold of the kit and the blue panel the other colour.

The saga of the track continues. The contractors are currently pile driving the embankment at the far end, well away from the house, however the sound is still carrying to us. Thankfully with 24hour working this weekend, the sound is softened by the small hill and farmhouse between us and the railway and our 18" thick walls.
However when Al was out on his tractor this morning, he noticed that a portakabin has appeared on the side of the track next to the pond on our land. No one has asked permission, it just appeared! 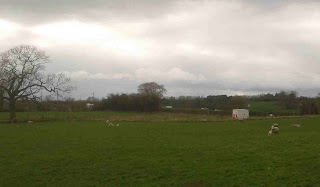 Now we wouldn't have minded if they wanted to put a cabin there as the young lad at the top directing traffic has been out in all weathers but why after  12 weeks  has it suddenly been necessary? I was furious, but Al being Al was very calm and said he would take a pic and email it to Railtrack. Another instance of downright ignorant behaviour! They may have an agreement with the farmhouse owner but they don't have it from us.
Watch this space. 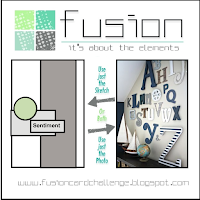 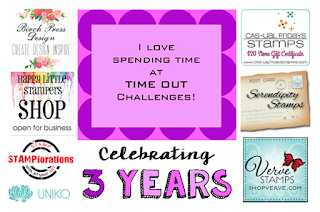 Love and/or Friendship with the optional technique twist of spotlight stamping.