Good afternoon. It's the middle of the month so time for a new colour combo at Color Hues.
Here's my take on the new colours. 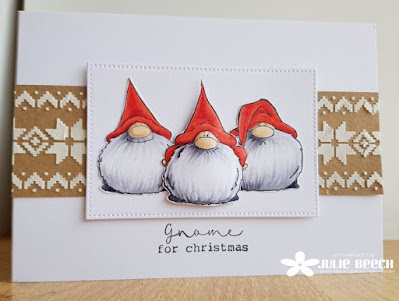 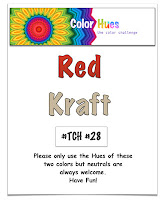 Red and Kraft just shouts Scandie Christmas so I decided to include some gnomes alongside a Nordic stencil background and a punny sentiment.
The Gnomes are from Stamping Bella and the stencil used for the background and sentiment are Funky Fossil.
I love these cute gnomes, especially the grumpy one, and couldn't resist buying them awhile ago after a Copic colouring class. I've missed getting together and crafting in a group, hopefully it wont be too long before we can get together again, I only need level 4 to complete the basic programme.
Any road, after stamping the gnomes, I coloured them with Copics and fussy cut them and attached them to a die cut white panel, the middle one popped up on pads. The background, I already had left after the Uniko/Funky Fossil Instahop, so just used up a couple of bits to make my central panel, you can't see the join under the gnomes, but I did attach one the wrong way up to begin with!! The stencil was laid over a panel of kraft card and Ranger Texture Paste added. I still have a few bits left so they may make an appearance later!
So where will these colours take you, as always we'd love to see.
For more red and kraft inspiration, check out the rest of the team here.
Posted by Julie B
Email ThisBlogThis!Share to TwitterShare to FacebookShare to Pinterest