Hi and welcome to a rather belated 7th Birthday birthday party at STAMPlorations. Better late than never, all the girls at STAMPlorations are showcasing goodies old and new.
Here is my first card of the week using both newly released and older items. 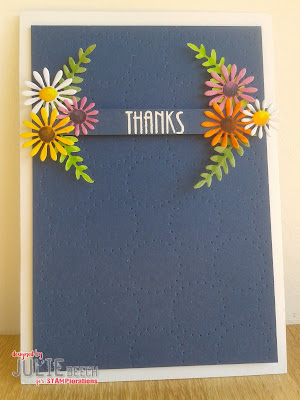 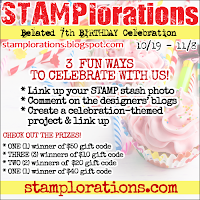 This card uses the Circles All Over Texture Coverplate that is released as part of the belated 7th birthday celebrations. I like the look of this and I'm sure it will be used a lot, it may even surface again later in the week!
For this design I used some blue card and ran it through my Big Shot using a sandwich which included my tan mat. Not sure if I needed to as I did another later without and the result was just as crisp.
The flowers and leaves are die cuts from Trendy Spring Blooms to which I added Copic marker centers and a little bit of shading with the markers too.
The thanks was stamped on a matching scrap buy adding first the main THANK from Frames and Flowers the the S from MISS in the same set, all heat embossed with white EP. Masking was a tad tricky but the effect looks fine I think.
The blue strip was added to the background panel on pads and the flowers and leaves arranged at either end. The finished panel was then added to a white base card.
As is usual with STAMPlorations birthday hops there are lots of ways to join in and to win some goodies. All details can be found on the STAMPlorations blog but here is a quick rundown.
Prizes:
- one (1) winner of $50 gift code randomly drawn from the STAMPlorations stash link-up found here, (closes on October 31).
- three (3) winners of $10 gift code randomly drawn from comments left on the birthday hop posts (STAMP blog and designers' blogs)
- two (2) winners of $20 gift code randomly drawn from entries in the birthday linky party
- one (1) winner of $40 gift code randomly drawn from entries in the birthday linky party
Commenting and linking up to the birthday linky party close on November 8
Sales/Promotions:
All products in the STAMPlorations store are 10% off instantly throughout October.
Also if you use my 20% off DT code when ordering, your order will include this not-yet-released stencil, Just Plaid square stencil (10 mil):
Here's my link to the STAMPlorations online shop:- STAMPGIRLJULIE 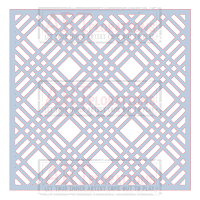 So get busy hopping and commenting if you want to win and come back tomorrow, same time for more belated birthday celebrations.
Posted by Julie B
Email ThisBlogThis!Share to TwitterShare to FacebookShare to Pinterest