Another one layer Christmas card

Afternoon peeps. Just taken the dog out before it got too dark, still not long now before the days start to lengthen!
Here is another Christmas card to share with you involving lots of masking. 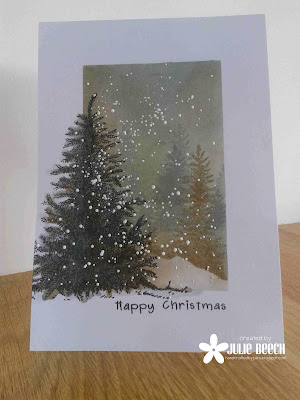 I love a one layer card but they do require some planning!
I started by masking off a rectangle with Post-its on a white base card and added a torn piece at the bottom to make a snowdrift. It was then inked up with DI before stamping some trees in the same. colours. The main tree was stamped in black and I added some of the same DI over the branches. The snowdrift looked too bright so I knocked it back with a touch of  Vintage Photo. Some white chunky EP was scattered over the scene and heated carefully so it didn't blow everywhere!
Finally I added a simple sentiment.
I'm still in the process of decorating the main tree in the lounge, it got too dark to see what I was doing, but the one in the snug is finished. It was one that we grew from a seedling planted nearly 10 years ago and it was sad that it had to be cut down but it had to be done though as the others were being crowded out. This is the third cull from the plot and there is something very satisfying in decorating your own grown tree. The last two came with roots but this was too large a root ball to get out without disturbing the others. My Grandson and OH cut it down last week but the weather was so vile that we left it soaking in a bucket until Thursday.

Christmas Trees
Posted by Julie B
Email ThisBlogThis!Share to TwitterShare to FacebookShare to Pinterest