Morning all.
It's Tuesday again, so it must be time for a new challenge at Cardz4Guyz.
This time we have a colour theme, just in time for those of you in the US celebrating the 4th July.

When I first read the theme, the union flag popped into my head, not being American, and then I remembered the old Mini, Ria in Butterflies had, that had the flag on the roof! I wonder how my mind works sometimes but once I had that image there it was difficult to jog it loose! So here is my slightly off piste take on the challenge. 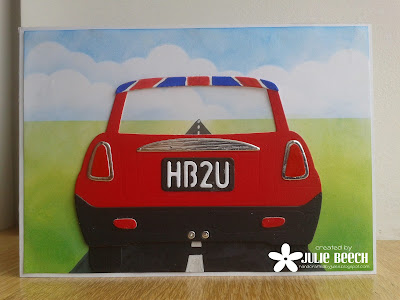 I used the MFT die set Joy Ride as it reminds me of a mini and sketched in a Union flag onto the roof section, colouring with Copics. I have called it the Union flag as I seem to think that the flag that flies over buildings is the Union Flag not the Union Jack, that is what it is called when flown on ships.
Anyway, I assembled the rest of my red Mini die cut pieces, added a clear plastic window and then thought about incorporating it into a card.

I looked at using DP but in the end I sketched in the horizon and a road onto a piece of paper and created a landscape for my car to sit in. The clouds were created using an MFT cloud stencil and Salty Ocean DI and the green was a mixture of Twisted Citron in the distance and Mown Lawn DI in the foreground. A dark grey Copic marker and white gel pen complete the road. I know he's driving down the middle of the road but I'm sure you will excuse the liberty! My finished panel was trimmed, then glued to an A6 side folding note card.

For more masculine inspired creation in red, white and blue, pop over to the Cardz4Guyz blog and check the rest of the team out. 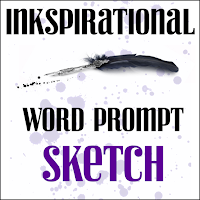 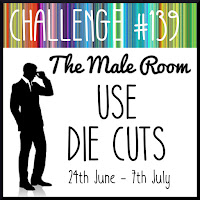