If music be the food of love..

..give me excess of it, so that surfeiting the appetite may sicken and so die.
That's about all I remember about Shakespeare's Twelfth Night other than a very embarrassing incident in the gent's loo at the old Leeds Playhouse in the early 70's, but enough said about that!
Anyway back to the present, and we have a brand new challenge over at Cardz4Guyz and you may have been wondering what the last paragraph was all about. Well our theme for this fortnight is -

Well as tomorrow is Valentine's day then it must be love but you could choose, lego, lions, light or whatever you want, so long as it starts with the letter L.
Here's mine. 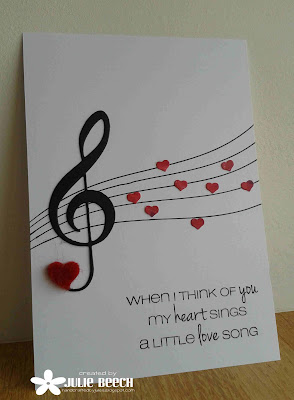 I decided to use my brand new CAS-ual Friday goodies which I bought with my voucher for winning with this card plus a little bit of homemade felt and freehand stave.
Using a snowdrift die I drew the five lines of the stave then added a black die cut treble clef cut using my CAS-ual Friday's die, then a selection of small hearts from the CAS-ual Fridays strip die. I have some needle felting bits and bobs, so I used a practice piece to cut a heart using the clef die and added it to the black original. The small hearts were cut from the same scrap of w/c paper coloured with Brusho which I used for this card, arranging them over the stave. I finished by stamping this fab sentiment from CAS-ual Fridays.

For move 'L' inspiration check out the rest of the team here. 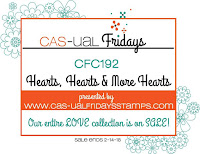 Felt, and my choice of diecut
Posted by Julie B
Email ThisBlogThis!Share to TwitterShare to FacebookShare to Pinterest