Morning crafters.
Well tonight is Bonfire Night over here in the UK, not something I'm overly keen on, so Max and I will be tucked up safely with the TV on and hubby can do what ever he wants! There are usually some large displays nearby that are visible from the landing window, that's the nearest I will be to them!
Where we used to live, November 4th was called mischief night, when pranks were played, but it has rather been taken over by Halloween of late. I remember my Dad telling me of the pranks he and his mates got up to in the 30's and 40's. One of his favourites was to tie a button onto a piece of cord, then toss it over the roof of a neighbour's house and dangle it next to the window, pulling on the cord to rattle it, the other involved dropping it down a drainpipe with much the same effect, miss his tales.

At this time of year we remember those who gave their lives for their country and despite what FIFA may say, wearing a poppy is not a political statement, it is an act of remembrance for the fallen. Luckily for our family my FiL came back safe if not unharmed from WW2 and Dad was just a little bit too young but many families were not as lucky. So with this in mind the latest challenge at Fantasy Stampers is

Here's my card for your inspiration. 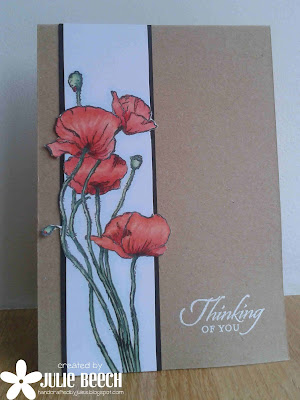 My Sheena Douglas poppy stamp is getting a second outing in this design but in a totally different way from my earlier card (here)
This time I've coloured the poppies with Copics before trimming down the panel, allowing the petals to over hang, then mounting it on black, then a kraft base card. The sentiment from Stampin Up is embossed in white.
OK, that's basically all there was to it. For more poppy themed inspiration please check out the rest of the DT and why not join in?


Posted by Julie B
Email ThisBlogThis!Share to TwitterShare to FacebookShare to Pinterest