Morning all.
Back again with a card for the new challenge over at Cardz4Guyz.
This week we would like to see your projects where the focus is on -

The title of the post is a clue to when I made the panel for the card. It's a Brusho panel made using Turquoise and a tiny dot of Yellow spritzed with a watery mix of Prussian Blue Brusho over a white embossed LOTV sentiment. When I got back after the retreat Brusho was still very much to the fore! 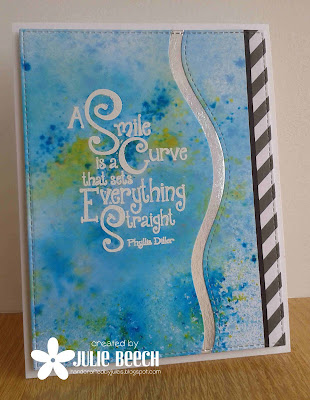 The card really came together when I saw the latest challenge at CAS(e) this Sketch. I used a strip of DP I got while at Snazzy's Craft shop in Swindon and I added strips of silver and black to go under my panel. The sentiment just suited the curved die from Lawn Fawn and although not a slavish copy, I think it suitably inspired by the sketch!
After gluing the layout down on a piece of white paper, I die cut a panel with a MFT stitched rectangle and then popped it up on a card base I found while clearing up after the retreat had finished. No one was claiming it so, well it was a shame to chuck it! We also found a packet of stencils and stamps under the table but soon realised it belonged to Lilian who had only recently left so Kylie and I, hot footed it out of the door and found her, Sue and Kathy in the car park still loading up the car, so tragedy averted!
That's it really from me but for more inspiration please check out the rest of the DT.