Hi, welcome to a special post to launch a new set of stamps from STAMPlorations by the very talented Dee of Dee's Art Utopia.

I've loved the stamp sets by Dee and this is no different. Here are a couple of cards that I made with this latest set called ANCHORED. 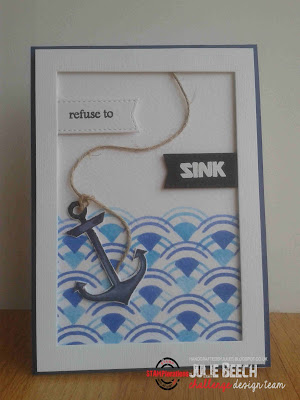 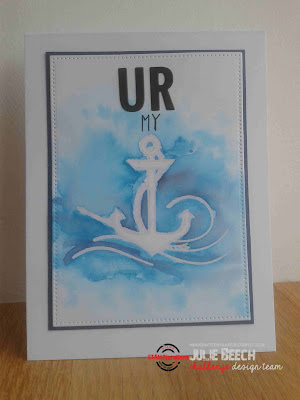 and here is what else you can find in the set. 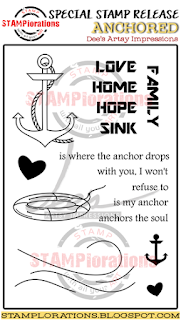 I used the large anchor for both cards, words on the first and the wave stamp for the second.
For the first card I first inked over the bottom half of a white card panel using two colours of DI, Blueprint Sketch and Salty Ocean through a Nestled Circles Stencil. Then I stamped the anchor on white card, coloured in Copics, then fussy cutting it out, cutting away the rope section leaving just the anchor. I stuck the anchor onto another piece of card then cut it out again to give it extra strength as I wanted to attach a piece of string to the top. I glued the trimmed panel to a blue base then added a textured white frame on pads sandwiching the end of the string. Before sticking down I added banners with the sentiments to the underside of the frame.

For my second card I stamped and embossed in clear EP the waves and anchor, then washed in some of the same two DIs as before, careful to avoid getting any on the anchor itself. When dry I added a die cut U and R then wrote MY freehand as I didn't have any stamps!. The panel was trimmed using a pierced rectangle die and mounted on a scrap of navy blue, then onto a white base card.
Comment on this and the other girl's posts (links here) for a chance to win the set before 11:55 PST on 18th December. 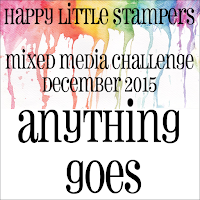