Good morning, just.
The forecast for today was sun but the clouds are grey and no sign of the sun at the moment.
Still that's just what the OH would like as he continues pointing the field side of the barn. Its a bit like the joke about the Forth Road Bridge, the painting/pointing never ends! We live in a very old barn conversion, probably dating from the late 18th century, but so far we haven't managed to trace its origins as it was once upon a time part of the huge Bridgewater Estate. We have found Tudor bricks at the base of some of the old walls but they could just be recycled from a near by manor house.  Still, lime mortar pointing old handmade bricks takes time and patience, which thankfully the OH has!

Anyway I've been in the craft room chilling with a little watercolour therapy. 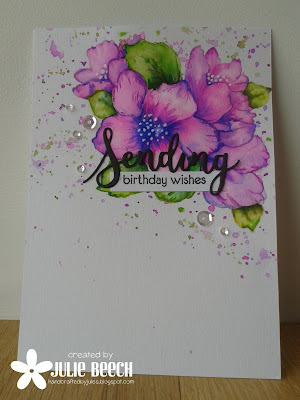 I've used the outline stamps from Altenew's Hibiscus Bouquet in a no line watercolour technique.
Love the colour and the large outline blooms are a favourite for colouring. Not much else to say about it really.

I've a couple of artichokes in the veg garden that were left a little too long and have flowered, but I don't mind as the bees adore them. They put their heads down and kinda get lost. I counted 6 on one head the other day. 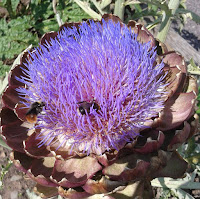 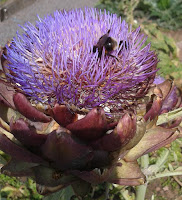 The first photo shows at least 4 bees in heaven, the other 2 are on the other side!

As summer begins to wind down, hay is being cut and baled in the far field, 2 more near the house still to do, but hopefully the rain will stay away long enough to get those fields done too. I do love the scent of newly mown hay but the wind has been in the wrong direction to get much of a sniff so far! 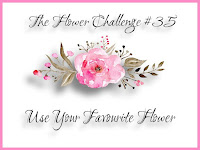