A little one handed crafting

What do you do when you've been told to rest your left arm because of a hairline fracture to the greater tuberosity? In my case climb the walls, well only figuratively!
No housework, OK, not too bothered about that.
No driving until I've seen physio later this week.
No gardening, not that I could do much as the weather has been awful.
No solo dog walking, as I can't hold the lead in my left hand.
No browsing the shops, need OH to drive me there.
There's only so much TV you can watch and holding a book for too long is a strain on my arm.

So, the other day, after 3 weeks of no crafting and my boredom threshold long passed, I attempted some of the one handed craft variety, with a little bit of help from my MISTI. I've managed to catch a few YouTube videos whilst resting and thought a little bit of imprecise colouring covered by die cuts might be the way to go.
Here's the result. 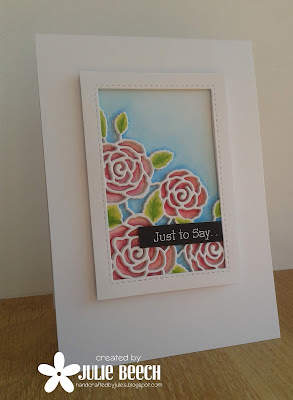 Jennifer McGuire calls this  technique 'faux stained glass' and made it look easy, but it is a little fiddly to layer the 5 die cuts with one hand but all I've got at the mo is time, glue on mat then smoosh was the only way. I had a hunt through the stash for a suitable die to use for the technique and although I love this group of roses by MB, perhaps it wasn't the easiest to use for this. The cells are a little on the small side but then I'd got no real deadline and lots of time to fiddle!
The colouring was a bit messier and took longer than usual but it was only a small area. The MISTI allowed me to keep the background and die cut steady while I coloured.
So listening to the footy on the radio on Saturday, I added some glossy accents to the petal cut outs and left it to dry before adding the top 'neat' die cut. Staring at it for awhile, I decided that I would add colour to the leaves, then added the MFT cut down frame. My one handed attempt at die cutting was a bit off, so the original had to be trimmed. 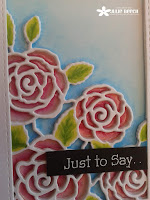 Not wishing to push my luck, I left it another day we before I completed the card, by adding a simple banner sentiment from LOTV, white EP on black and attached the finished panel to a base card, MISTI  to the rescue again.
Now I'd completed my card it was only a matter of one finger typing to write this post, yeah, that took ages too! Hurry up physio!!!!!!!! 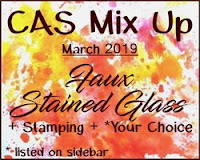 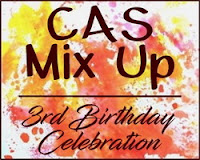 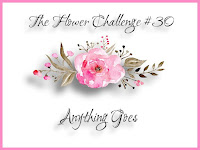 One for the ladies
Posted by Julie B
Email ThisBlogThis!Share to TwitterShare to FacebookShare to Pinterest