Morning all.
The weather was positively spring like with all the sunshine streaming in through the windows, showing up all that dust, but the wind chill was something else. A hat and a pair of warm gloves were the order of the day when I took Max out. It's looking a little better wind wise today and the thermometer is set to rise into double figures tomorrow, fingers crossed.
The saga of the track continues. On Saturday when I walked Max up the drive there was an enormous lake in the dip on the lane, so much so that Max had to tiptoe around the edge. My husband had a word with the surveyor acting for Railtrak  and they are come to see us yesterday so that they could hear our thoughts. Anyway, whatever Al said must have encouraged the site manager to do something because by the time I went out in the afternoon the lake had gone but they had not fixed the drain but bulldozed a good 6"of road planings over so the lake was buried!
The guys who came yesterday didn't seem to be aware of the problems other than what we told them so they went with Al for a walk an were a little sheepish about the encroachment onto our land by the wagons. Watch this space!
OK, over at Cardz4Guyz its time for a brand new challenge and its my choice -

Here is my card. 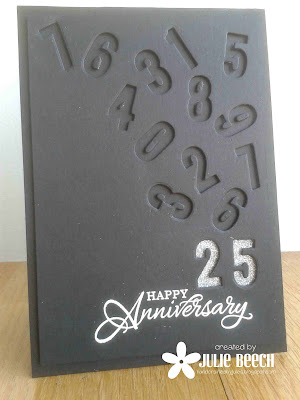 I'd seen a card a while ago on Pinterest, using cut out numbers but for a birthday. I really thought it a great idea so this is my CASE of it. In the original the hilighted numbers were pink but as it was for a fella, silver sparkle was much more suitable. You could change the colour and the numbers to suit.
I die cut a selection of tumbling numbers with MFT's little numbers then fit a snippet of glitter card behind the 25 before popping the top panel over a black base card on pads. The sentiment was free with a mag a couple of months back, which I embossed with white EP. I replaced the fiddly bits cut from the number centers and that was it.
For more inspiration please check out the rest of the team here. 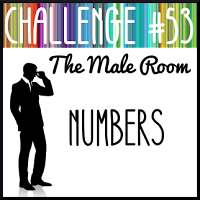