Kylie's 12 Days of Christmas with Friends

Good evening folks.
As many of you may or may not know, Kylie (is Addicted to Stamps and More) is hosting a 12 days of Christmas card challenge over at her blog and she very kindly asked me if I would participate as one of her friends. I was lucky enough to meet her in person at the 2016 HLS retreat, I don't know how she finds the time to organize everything but she does and does it so well.
Here is my contribution on the final day of the 12. 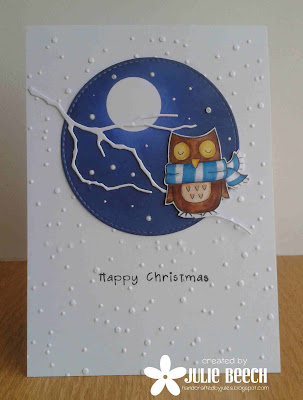 I made this for my old next door neighbour Audrey.
When we moved in next door to her over 45 years ago, she welcomed us kids and started taking me to football matches as she had a spare season ticket that her Mum was unable to use because of ill health. Well that started a long tradition of blue and white owl themed cards and pressies, both for birthdays and Christmas. Why owls you may ask, well she is an ardent supporter of Sheffield Wednesday FC whose nickname is the Owls, because their original stadium was in Owlerton but now play at Hillsborough. I did go to the odd Wednesday match but I was really a red and white supporter, the Blades or Sheffield United and Audrey went along there as well! She even went to the smaller non league Hallam FC when there were no League games, a true sports fan!
This Lawn Fawn owl was coloured with Copics, including his blue and white supporters scarf, before being fussy cut and mounted on his die cut branch (Memory Box) and the inked and masked panel. Snow on the panel was added with white Cosmic Shimmer white glue and the base using an old Cuttlebug EF. 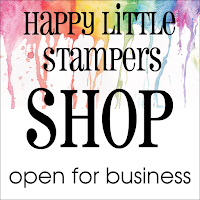 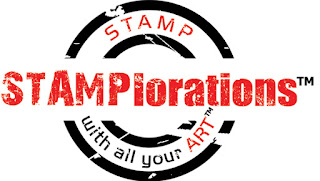 20€ Gift Certificate
Winners will be drawn at random.

Thanks for asking me to participate Kylie, hope you will all join in too.

I'm also joining in over at - 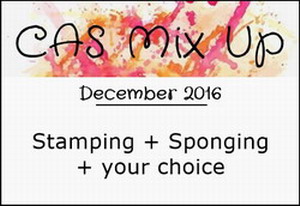 Dry embossing and die cuts
Posted by Julie B
Email ThisBlogThis!Share to TwitterShare to FacebookShare to Pinterest