Good morning peeps.
As it's Thursday it's time for another challenge over at Cardz4Galz.
This week our challenge is to create a project with the theme of -

This would seem to need a very girly interpretation, not me at all despite my two pink DT cards of the last two weeks!
Anyway after a bit of a disaster with my first attempt when I had all but finished my DT card I stamped the greeting only to see a little bit of black ink on my white background, arrgh!!!! I had picked a little smudge of it on my little finger! So I was going to try to redo it but in the end I started from scratch and went with this, hope you like it.

As I was browsing yesterday while eating my breakfast I saw the photo challenge over at Creative Inspirations. What a fantastic kingfisher. It reminds me of my Dad who saw one fly past his workshop window in a very industrial part of Sheffield many years ago. A sign to him that the River Don was clean enough again for fish to live in for the kingfisher to catch. Happy days! 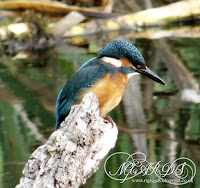 Anyway I took inspiration from the colours of the feathers, iridescent green/blue and the orange of his chest and the wood he's perched on. The layout is from the Paper Players this week.
The background was made by stamping SU Hardwood in Frayed Burlap DI and mounted on brown.
The circle was cut from kraft then embossed using a Crafters Companion EF. The flowers were cut using Sizzix thinlets Flower die, then inked with Peacock Feathers, Evergreen Bough and Twisted Citron DI.
Orange buttons were threaded with white linen and tied in bows and stuck as centers on the flowers. A few blue/green buttons were added and a banner cut using a MFT die in brown and a gold stamped and embossed greeting added. The branch of leaves was in my bits box and I inked them with the Frayed Burlap to tone down the green of the original.

OK, that's my interpretation, what will your's be. We'd love it if you joined us. For more inspiration check out the rest of the DT here.